The Geeky Side: How it Began

Once upon a time, Wil and Tyra started a podcast where they talked about their geeky sides. Every time schedules collided, they would get behind their mics and share with the internet the latest in geeky news, explore fandoms, and occasionally a guest would drop by. Then life happened. And a Pandemic. And both of their lives got increasingly complicated, and finding time to geek out together became harder and harder until it evaporated into the ether.

In the summer of 2022, The Geeky Side was reborn and relaunched as a talk show with weekly interviews where people discuss their geeky interests, hobbies, and life. Tyra is flying solo as the host, but Wil may drop in from time to time as life allows. You can find show notes and blogs from season one in the archive and the latest news in the blog.

The Geek Host of The Geeky Side 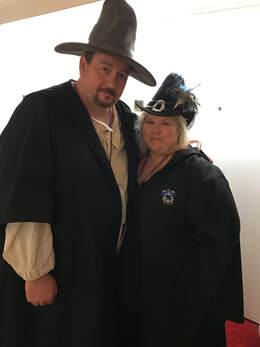 Tyra Burton
​Tyra is a social media muse, award-winning professor, gamer-girl, and lover of all things geeky. She grew up playing card games, watching Star Trek and Quincy, ME, and reading Asimov and Agatha Christie. This strange combination produced a gamer-geek who loves mysteries, World of Warcraft, police procedurals, and science-fiction and fantasy.

She writes in both the fiction and non-fiction worlds. Her book on social media, Socially Engaged, targets authors and how they can utilize social. Her first science-fiction novel, Penduli Station, was released in August 2018.

She loves dark chocolate, Jameson & Ginger Ale, Ireland, and her two dogs and two kitties. She wants to be Princess Leia, Wonder Woman, or, most likely, Penelope Garcia from Criminal Minds when she grows up. An eternal DragonCon member, she met her husband there in 2009 at a Lord of the Rings concert. They live happily in their house in the woods with their socially engaging fur babies.